A conversation on how tension and taking a second look at your writing can give it more HECK YEAH!

In working on an alternative future feature-length screenplay with writing partner Tom Mercer, I recalled something I had been talking to comic book artist Rick Arthur about. Rick, a great writer in my opinion, and I have had long conversations on tension. At the time, I had been working on a different script and in trying to "up the stakes," I wrote a scene that happened to have a similar fight to a later scene. I suppose that other people, looking at the recent crop of lack-luster action adventure films, would have left it as was, but I knew the earlier fight would take away from the later one and worked hard to fix them. Thankfully, I was able come up with a solid solution that achieved all the plot points, but in a different way. This reminded me of one of the talks Rick and I had about Star Wars: Episode II Attack of the Clones and suggestions he had for the gladiator scene (you know, the one with the three beasts who were to eat up Obi-Wan, Anakin and Padmé.) Lately I've been rolling my eyes at films like Pirates of the Caribbean II and III and X-Men III for they're trade-in of story for special effects and because the films failed to utilize their genre roots. Attack was also guilty of this and Rick told me it was because they attempted an homage to gladiator movies, but didn't do the classic arena scene justice. As he and I talked about, it also showed gross negligence in not seizing the possible tension nor the possible plot points. Not to droll on about the Prequels, but I almost wish I could somehow redo that scene to show how it could have worked. Hopefully Rick doesn't mind me mixing in his ideas in the following description of how I might change such a scene... 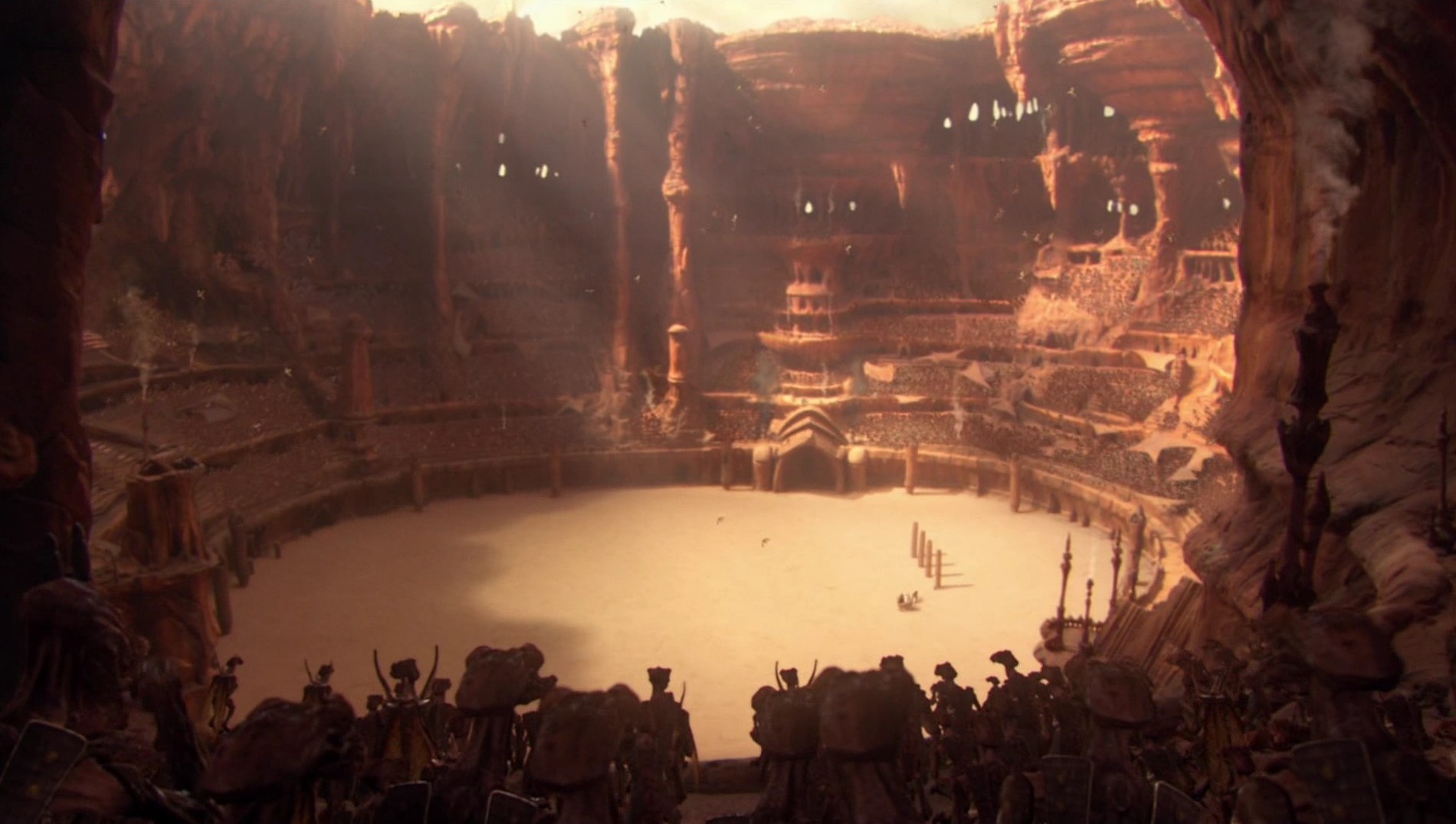 The arena from Star Wars: Episode II Attack of the Clones.
First, Count Duuku visits Padmé in a holding cell. He may try to seduce her and make her a pawn for his uses (and fail) if it doesn't take too much screen time. But, I would have him drug her ("Something for the pain, my dear." [insert evil laugher] ). So then, Anakin and Obi-Wan are in the anti-Force restraining units (ugh, but okay) and are wheeled out on a balcony overlooking the arena. The crowd CHEERS and the two Jedi see Padmé is restrained on a pillar down below. In Padmé's vision, her sight is blurry and the cheering is oppressive to her. Ani and Obi-Wan try to reason with Duuku etc, but to no avail. Duuku places their lightsabers on the rail before them and goads them. Three lion-like creatures (slightly bigger than Earth lions and more teeth) are released. ROAR! YAY goes the crowd! The cats circle their prey. Padmé's vision is still fuzzy, she sees and hears echoes of the cats. The two Jedi pull on their restraints, but can't get free. Obi-Wan calls out Padmé's name! Ani fumes, then quiets, his anger smoldering, building within him. The cats test their prey, jumping towards her and away. One swipes at her and she yelps! White fabric is torn from her belly and the claws graze her skin leaving bloody scratches. "Duuku!" Ani says. "I will kill you for this!" Ani's closes his eyes and concentrates, flexing all his muscles. A low rubble emits from him. He yells and rips his arms free, the metal shattering, electronics popping! He pulls his lightsaber to his hand and cuts Obi-Wan free. Obi-Wan yells, "Get her!" Ani launches into the air and into the arena. Obi-Wan spins in the air, his lightsaber bursts to life as it flies to him and he brings it down on Duuku in one swift flourish. Duuku ignites his saber and jumps back, blocking Obi-Wan's blow just in time...

Hopefully that's more intense a scene and I think it establishes two plot points missing in the films-- Ani's ultra power potential and his touching the Dark Side. It also achieves an objective that Mr. Lucas undoubtedly had, which was to make it different enough from Luke's fight with the Rancor. I think it also gives Padmé a little more worth by sharing some of her experiences personally. Also, drugging her implies that Duuku sees her as a threat. One other idea I had was for the Return of the Sith. I thought if Padmé had gotten hurt more seriously at the end (meaning Ani was more gripped by the Dark Side) that instead of just speeding her to doctors, Obi-Wan could have had to hurry and deliver the children himself before Padmé died. So, it takes the last of her strength to deliver them and she dies asking Obi-Wan to look after them and thanking Obi-Wan for being a true friend. When I thought of that I said WOW! It was going to be a downer ending anyhow, why not let it make sense? I mean, I think Lucas already went outside the bounds of action adventure serials with these films, why not make them really dramatic, intense and have deep impact and resonance?

In the end, there's nothing we can do but make sure we try our best in our writing. That and maybe we should consult people we respect to consult on our writing (and listen to them.) Writing takes a lot of time and care and let's face it, can be the least expensive part of a film. Why not put more stress on that and get more for your money? Certainly there are all sorts of factors that effect, filter and possibly degrade the writer's work before it gets to the screen, but just as certain is how the story should be central to the work. I suppose also I must ask producers and directors to take better care of the writing because no matter how many Johnny Depps, Ewan McGregors or Hugh Jackmans you have delivering great performances, there's only so much they can do to help the writing. And whatever happened to 'special effects are a tool and shouldn't take over the story'? Looks like getting back to our roots is more important than ever. Tension, tension, tension! Best of luck to all you film makers out there!
Posted by Ben Alpi at 10:04 AM