Indeed, What the Hell is Wrong With Us?

As some of you know, I have a very talented brother who is a novelist, Bob. He's recently started a new blog and having read a particularly meaty post, I thought it only appropriate to respond to his very important query: What the Hell is Wrong With Us? Please read his original post on BobAlpi.com.

Bob has hit upon something that's disgusted me ever since I was introduced to tabloid newspapers by my friend's mom in ole Bombay, NY. At first I thought it was a joke since my friend and I often read MAD Magazine and watched Saturday Night Live. I soon found out however that people actually read tabloids as news. Over ten years later, it was start of the second Iraq war when my roommate was watching news about it on her TV. I was aghast at the broadcast because it was the most sensational newscast I'd ever seen while the pundits reported with actual excitement as movie trailer-worthy graphics exploded across the screen. I thought it must have been a tabloid show-- something out of a sci fi movie that used such news networks as an illustration of the degradation of society. I thought the news was very liberal. I had watched CNN now-and-then after the first Iraq war propelled the network to the fore in '91 and thought this had a similar tone-- although far more sensational. I asked my roommate what network it was-- FOX News. We didn't get Fox where I grew up and when I moved to bigger TV markets, I didn't watch much TV. I then learned it was supposed to be the conservative voice in TV news. What? After what I saw?! It was news marketed for easy consumption similar to propaganda, I thought. I wonder now if the second Iraq war is what propelled Fox News to the fore. 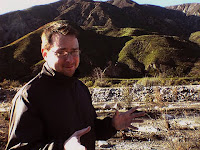 When we call our friends or family, conversation can often lead to commiseration or venting about work, school, life and significant others. In some cases, the entire conversation can be filled with all the unfortunate things that happened. And one conversation can string to several of the same tone. The same can happen in your inner dialog. But, was your year, month, week, day all bad? Perhaps, but I'd bet there were rays of sunshine in there. Sometimes though, you have to dig for them. It can be something as simple as a baby you saw at the store, the sound of the wind blowing through the trees or even the aroma of a cup of coffee. If we have to dig, is that a negative thing? Not at all. It may be that things really do suck the majority of the time, but there is a chance that it's just our perception making it seem like it does. For folks dealing with real issues like disease, death and other trauma, it certainly can seem that the world is coming down about them. Those are situations that need real help and not my simple thoughts, but I would wager that they wouldn't mind knowing little bits of awesome are still happening. In less severe cases, it can just feel like the world is against you. Nothing seems to come out right. Some might say that things are going wrong because you're following the wrong path. But, what if you can't change your path? You're stuck at your job in order to afford to feed your kids or maybe you're unemployed.... You love your husband, but he's not spending enough time, or too much, with you... Your grandmother has dementia and you have to care for her... These are all easily imagined or you live them every day. So ask yourself, when you call your mom or brother or best friend, do you just tell them about the negative? Do you not talk because you don't want to just vent? Venting is a healthy thing. If you have someone to vent to, you're a very lucky person (return the favor!) If you don't, find one! Just try to adopt this little habit: Be sure to toss in at least one event that was awesome.

For many of us, it can seem like there is no awesome happening to us. We tell ourselves there's nothing good and eventually, we make it a reality. We keep looking out from the shadows only to see more shadows. That's when you have to start picking out the pools of light. Challenges and difficulties will be a constant and you'll need to keep working through them for sure. Yet perhaps every week or every day, take a moment to reflect and find whatever either brought you or will bring you a little joy. Find the something awesome that happened and eventually, there will be a whole lot of awesome in your life.

Sci Fi Channel and the Death of Science Fiction TV

If you haven't heard, Sci Fi Channel has announced that they're changing their name to SyFy Channel in an attempt to broaden their audience. What we have to remember however, is this is about dollars, not geeks.

“We spent a lot of time in the ’90s trying to distance the network from science fiction, which is largely why it’s called Sci Fi,” said TV historian Tim Brooks, who helped launch Sci Fi Channel when he worked at USA Network.

Looking passed the fact that "sci-fi" and "science fiction" are synonyms in the vernacular (as much as Harlan Ellison hates it), this statement still doesn't quite jive with reality. Sci Fi Channel started in 1992 under an advisory board including Star Trek creator Gene Roddenberry, author Isaac Asimov and if my memory of the comic book ads is correct, actor Leonard Nimoy. A joint venture of Paramount Pictures, USA Networks, and Universal Pictures, the whole point of the channel was to rerun old science fiction shows and movies of which the studios had many. It was to be a celebration of science fiction although, I personally didn't know if there was enough applicable programming to support an entire channel. These days, you can catch an episode or series online or on DVD, but in those days, if you missed a show, it was possible that you'd never see it again. So at the time, the chance to see Twilight Zone, original Battlestar Galactica and Buck Rogers in the 25th Century was pretty darn cool. Unfortunately, we didn't get the channel at the time and I was relegated to reading about it in Wizard Magazine. Brooks' claim that they were trying to distance themselves doesn't seem to ring true until the 21st Century. Until that time they did run a lot of horror, but I still caught Star Trek, Space Above and Beyond and Babylon 5 through the turn of the century. Prime time on Friday nights (oft called SciFridays) was their most advertised lineup and has contained much of their original programming like Farscape, Stargate SG-1/Atlantis, Battlestar Galactica, Andromeda and The Secret Adventures Of Jules Verne plus, Dr Who (BBC). Sounds pretty science fictiony to me. Even some of their largest ventures were two massive Dune mini-series. Still, direct-to-video quality horror movies, paranormal programs like John Edwards and Ghost Hunters and reality shows were creeping in around 2000. And meanwhile, science fiction was disappearing from American networks.

I know a little about video game engines and such, but I thought I'd submit this to my readers to see if maybe you could help me with the gaps in my knowledge. As some may know, I'm not happy with DRM and resource heavy Windows Vista and I'm wondering what might happen in the PC gaming world when Microsoft stops selling XP. Mainly, the question is, can OpenGL completely replace DirectX 10+? Mac, Unix, GNU, Linux all use OpenGL, but looking into DirectX, it would seem it's more powerful than OpenGL when matched with the right GPU (Graphics Processing Unit.) DirectX 10 is supposed to be fast and streamlined, which is cool, but it's only on Vista. The thing is, both OpenGL and Direct X use the same Shader Model. Does that mean OpenGL has the same abilities? I speak mainly of the amazing texturing and displacement mapping now possible with engines like the Unreal Engine 3. From what I have read, that engine was built for DirectX 9 (and patched to 10) so, I don't know how viable OpenGL is on "next generation" platforms. Then again, Call of Duty 4 is on Intel Macs and doesn't seem to take a hit graphically (although I've never played it on an Mac so, I'm not an authority.) So, anyone have the skinny this stuff?

A conversation on how tension and taking a second look at your writing can give it more HECK YEAH!

In working on an alternative future feature-length screenplay with writing partner Tom Mercer, I recalled something I had been talking to comic book artist Rick Arthur about. Rick, a great writer in my opinion, and I have had long conversations on tension. At the time, I had been working on a different script and in trying to "up the stakes," I wrote a scene that happened to have a similar fight to a later scene. I suppose that other people, looking at the recent crop of lack-luster action adventure films, would have left it as was, but I knew the earlier fight would take away from the later one and worked hard to fix them. Thankfully, I was able come up with a solid solution that achieved all the plot points, but in a different way. This reminded me of one of the talks Rick and I had about Star Wars: Episode II Attack of the Clones and suggestions he had for the gladiator scene (you know, the one with the three beasts who were to eat up Obi-Wan, Anakin and Padmé.) Lately I've been rolling my eyes at films like Pirates of the Caribbean II and III and X-Men III for they're trade-in of story for special effects and because the films failed to utilize their genre roots. Attack was also guilty of this and Rick told me it was because they attempted an homage to gladiator movies, but didn't do the classic arena scene justice. As he and I talked about, it also showed gross negligence in not seizing the possible tension nor the possible plot points. Not to droll on about the Prequels, but I almost wish I could somehow redo that scene to show how it could have worked. Hopefully Rick doesn't mind me mixing in his ideas in the following description of how I might change such a scene...